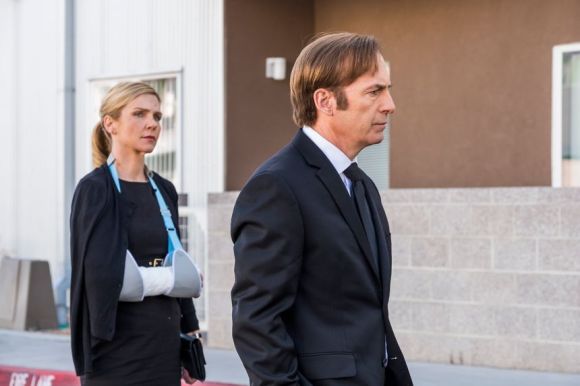 In the first episode of the new season of Better Call Saul, we deal with the repercussions of Chuck’s fiery demise in last season’s “Chicanery” and have some quality Ehrmantraut Warehouse Fun.

Jimmy spends the majority of the episode in shock over Chuck’s shack fire, as the trove of lawyers reach out to pay their respects to his apathetic visage and Howard Hamlin, going through some bad times himself, recites an unending list of Chuck’s many achievements in Law.

The episode starts in black and white as the life of Gene, the Cinnabon dude that’s totally not a false identity, gets less boring and more paranoid.  After “a false alarm” that leaves him having to nervously check his documents at a local hospital, he gets into a cab whose driver gives him a rear view glare of acknowledgement, the inside of the car adorned with a piece of his hometown, Albuquerque. Perhaps the jig is up for Good Ol’ Gene, but something tells me that is only the beginning of the Breaking Bad survivor’s new challenges in Nebraska.

While Gus Fring explains the repercussions of the fall of Hector and the inevitable arrival of the DEA(Which means a certain bald officer from Breaking Bad might be on his way to the show), Mike Ehrmantraut decides to do the job Madrigal is paying for and actually provide security counsel to his company. It’s an impressive set piece that starts with an amazing scene where a father teaches his son how to fix a bike chain. When this one-off character gets into his car to make his way to work he finds the ignition to be uncaring of his efforts, which, for some reason gave me the impression that a car bomb would explode, but as in any case of false expectations that the show is known for, it was simply a ploy for the crafty Mike to steal the man’s badge for the day.

What proceeds is an inverse heist like sequence where Mike goes around his business in the company headquarters, making note of every single flaw in their security and even signing a birthday card for oblivious workers too busy wondering if Bruce Lee could take on Mohammed Ali to have an inkling of an idea that Mike shouldn’t be there.

Clearly the shadowy lawyer that Jimmy is fated to become is seeping through the cracks here, as a grieving Howard goes to Kim’s apartment to blame himself for Chuck’s demise, but he is met by a carefree Jimmy that simply says:

“Well, Howard, I guess that’s your cross to bear.”

Some fish feeding, a few whistles later and we have a glimpse that what viewers expect out of Jimmy’s future has never been closer to becoming a reality.